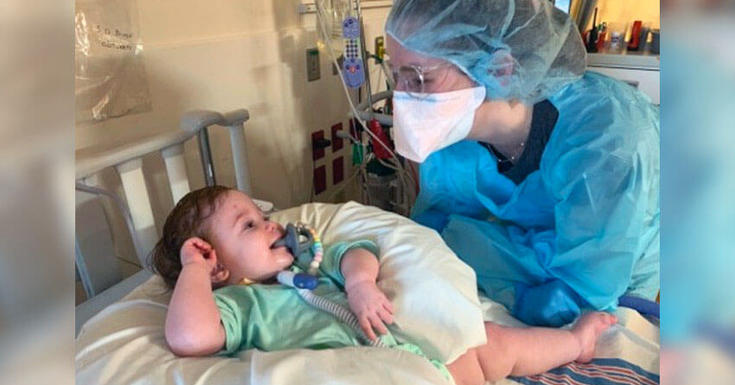 When Chicago-local Andrea Bell was 17 weeks pregnant, she and her husband learned that their daughter had spina bifida, a birth defect that causes the spinal cord in the base of the spine to protrude through an opening in the skin. The condition affects one in every thousand live births and can result in difficulties with walking and standing.

When Bell was six months pregnant, she decided to quit her job and move to Ann Arbor where she felt University of Michigan Health C.S. Mott Children’s Hospital was equipped to provide more options for the first-time parents.

Unfortunately, Fiona’s first year of life with spina bifida would be the least of the family’s concern after the 17-month-old contracted COVID-19 and went into respiratory failure 12 hours later.

After three weeks on a ventilator and 10 days on extracorporeal membrane oxygenation, also known as ECMO, which provides the highest level of respiratory and cardiac support to patients with serious illness, Fiona was discharged home.

Now Bell, who has been an advocate for Fiona since she was pregnant, shares a cautionary message for people leaving their masks at home after mandates have been lifted in their areas.

For two weeks, newborn intensive care baby Fiona was being monitored for hydrocephalus, when fluid buildup occurs in brain ventricles. This can happen because the flow of cerebrospinal fluid around the brain and spinal cord is often affected in children with spina bifida, and it requires a shunt operation to treat.

At 14 days old, Fiona stopped opening her jaw, sounding the alarm to Garton that her brain ventricles may have become engorged with fluid. After a lifesaving shunt operation, Fiona was able to come home with her family for the first time on Christmas Eve.

Fiona was a happy baby, and although Bell and her husband were juggling two full time jobs, they were so grateful.

“Spina bifida is like a snowflake. It presents in different ways in different kids so it’s difficult to know what to expect,” Bell said. “Some of the rare problems that can occur with spina bifida happened to Fiona, and other things that doctors expected and were more common didn’t affect her.”

Then, in April 2020, Fiona began to quickly lose weight and a NG tube was placed to help her receive nutrients. Her secretions began to increase and a misdiagnosis of bronchitis slowed a true diagnosis. Fiona began to slowly lose her ability to swallow, which Garton was quick to identify and diagnosis as Chiari II Malformation, an anomaly of the brain characterized by a protrusion of a small part of the brain through the bottom of the skull and into the spinal canal.

“It was so nice to be home and see Fiona happy and doing well. She has full movement from her head to her toes, and she’s just the happiest baby,” Bell said. “You really have to take advantage of all the good moments and take life day by day.”

Bell knew how to roll with the punches, but she never expected the emotional trauma that she’d endure after watching Fiona go into respiratory failure soon after she was discharged home.

On July 4 2020, “She quickly lost color; she went blue and limp,” Bell recalled. “But the NICU has you take CPR classes before discharge, so I started performing CPR on the floor of her nursery while my husband was on the phone with 911.”

Thankfully the CPR worked and EMS was able to get Fiona to Mott. At the hospital, doctors discovered vocal cord paralysis, which is what triggered respiratory failure and ultimately led to a tracheotomy.

After trach training, a newly added G Tube, new sleep apnea diagnosis and another month in the hospital, Fiona was once again discharged home. But the Bell family needed a major reset.

“We rearranged the nursery when we got back home, and the house is something I’m really proud of,” Bell said. “We’ve made it possible to have her medical equipment a natural part of our space and make her situation feel as normal as possible for her.”

And everything was as normal as possible for many months. According to Bell, since August, Fiona seemed to be thriving and really taking off developmentally. She was crushing her physical therapy appointments and having home nurses helped the family maintain the consistency Fiona needed to stay successful.

Approximately eight months later in early April of this year, the Bell family had a known coronavirus exposure. No one had any symptoms and when tested, all their results came back negative. But two days later, Bell noticed Fiona was needing more oxygen at night (she received oxygen for her sleep apnea), and she was having more secretions.

“We thought this was a complication of her chronic condition,” Padilla said. “But our normal interventions weren’t working.”

When Fiona arrived at the hospital, her COVID-19 test came back negative once again. However, only a few hours later, Fiona, now red, burning up and completely lethargic, tested positive for COVID-19. And in 12 hours, Bell’s 17-month-old baby girl would again, be going into respiratory failure.

Fiona was moved from the general floor to the pediatric intensive care unit, a unit that provides advanced care for infants, children and young adults with a wide variety of life-threatening issues, where she was placed on a ventilator.

“We had worked so hard; Fiona’s never even had a cold,” Bell said. “Besides brain surgeries, she’s always been very healthy, and since August, she’s been the healthiest she’s ever been.”

After only a few hours on a ventilator, Fiona now was being placed on ECMO. She stayed on ECMO for 10 days.

Bell remained in the PICU isolation room with Fiona. “I was trapped in this hospital room with our worst nightmare. ECMO basically took up the entire hospital room, and then there was my baby, sedated and paralyzed,” Bell recalled.

“There can be complications from ECMO; we worry about long term effects on the lungs. And with COVID-19, you have things like blood clots and injury to organs,” Padilla said.

It became a waiting game. Bell knew that ECMO was working to keep her daughter alive, but she didn’t know what would happen to Fiona after she woke up. Fiona’s care team tried to prepare the family with all the possibilities.

Bell stayed with her daughter in the PICU for 41 days. There was one thing that Bell said was able to keep her sane: the view outside her window. Their room overlooked the Nichols Arboretum, beautiful botanical gardens, that she was able to watch bloom over the course of those spring months.

When Fiona woke up, she had complications with blood clots that the care team managed with a blood thinner. Now home, Fiona still requires frequent breathing treatments and injections twice a day to break down old clots and prevent new ones from occurring.

Amazingly, despite Fiona’s complicated medical regiment, Bell says she continues to reach developmental milestones at home, and her social skills and muscle strength continue to improve each day.

“She has always exceeded every expectation and statistic. She does all the things people said she wouldn’t,” Bell said. “This has been such a humbling experience. This morning, I got to sit and cuddle her on the couch, and that moment meant everything to me.”

She adds: all I want for my daughter is for her to stay her bright, bubbly and feisty self.

The family continues to try and build a new normal for Fiona again, and offer a warning for other parents.

“What happened to Fiona could happen to anyone,” she said. “Wear a mask. Get vaccinated. Care about others that don’t have the privilege to not care about this virus. You could save someone’s life. You don’t think healthy people can get really sick, but Fiona has never had a compromised immune system and she almost lost her life.”

Currently, only those 12-years-old and older are eligible for a COVID-19 vaccine, leaving younger children and babies at risk of serious illness.

“This virus hasn’t been around long enough for us to know exactly who will have the most severe reaction. In the adult world, we think we know who is high risk, but in pediatrics we really don’t know how it affects children with chronic illnesses like Fiona. How does it affect those with Down Syndrome, cerebral palsy, or juvenile arthritis?”, Padilla asked. “Everyone probably knows someone who has a chronic illness, and we should all do our part to keep those people safe.”

“If you think my daughter’s story is inspiring, be inspired to wear a mask to protect kids like her,” Bell said.