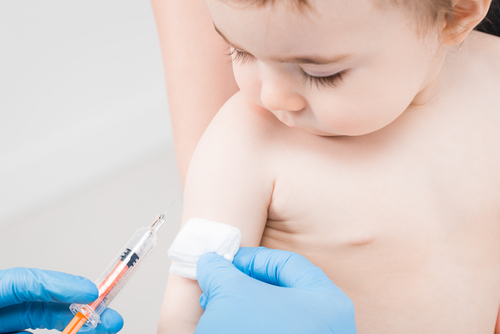 Abbey Clint took her 7-month-old daughter to the doctor’s office for shots last week, snapped a photo, and wrote a Facebook post about how proud she was to vaccinate her children.

“I grew up unvaccinated before it was cool,” she wrote. “I’ve had to catch up on my inoculations with each pregnancy. Glad I didn’t catch measles while pregnant! Glad my babies don’t need to suffer through preventable infectious diseases. Preventative maintenance saves co-pays and saves lives. Proud to vaccinate!”

The 30-year-old Pennsylvania mom thought the post might irk her Facebook friends who are anti-vaccine, but as the US faces a record-breaking year of measles cases, she wanted to highlight the facts. Misinformation spread by social media has caused children’s vaccination rates to dangerously drop in some communities, public health officials have said. In response, some parents are now turning to social media to spread information and a pro-vaccine message.

For people like Clint, who said she grew up hearing every argument against vaccinations, it’s about calculating risks: She feels lucky she didn’t get seriously sick and isn’t willing to take that chance on her own children.

Along with photos from the doctor’s office, she posted an infographic on the lack of scientific evidence linking vaccines and autism, as well as the risks of preventable diseases.

“There’s a lot of anti-vax memes being shared in my personal circles,” she told BuzzFeed News. “So I was just throwing out a different side of things, just for the sake of keeping it a conversation and not an echo chamber.”

People paid attention: Over the next days, the post was shared into anti-vaccine as well as pro-vaccine Facebook groups, where it got more than 6,000 comments. Other adults who’d missed vaccines as children described catching up on shots and their commitment to vaccinating their kids. Some people thanked her for protecting her children, as well as infants too young to be vaccinated or people with compromised immune systems. Others went on the attack, accusing her of putting her kids at risk — or claiming the girls already looked like they were suffering dangerous side effects.

Clint told BuzzFeed News her daughters haven’t had any bad reaction to vaccines; they’re healthy and active. And while some of the comments were combative, she said she understands where anti-vax and vaccine-hesitant moms are coming from.

“I think there is a lot of fear that is embedded in this whole issue,” she said. “That goes beyond simply the vaccines themselves.”

Clint grew up unvaccinated because of her mother’s opinions on medicine, which she described as fueled by distrust of doctors.

“We grew up without a lot of antibiotics, without any Tylenol, pain meds, or anything like that,” she said. “To this day my mom’s cupboard at home is full of all-natural supplements, and you cannot find an ibuprofen.”

For years, Clint said she didn’t question those views. Before she and her husband married, they discussed a plan to not vaccinate their children — after all, Clint had grown up fine without them.

But she kept talking about the issue with others, including her mother-in-law who had rubella. The disease can cause lifelong issues if a pregnant woman passes it onto her child.

“What if I caught it? What if my baby caught it in my womb?” she said. “It’s preventable. That’s what’s shocking to me now.”

Looking at other diseases that vaccines were created to fight, she thought about the odds of getting sick, her children getting sick, or someone else’s child getting sick.

“I had to step aside from all the emotions,” she said. “I had to look at the statistics, see which sources I trust, and just be as dispassionate, logical — no matter how heartless it seemed — and weigh my odds.”