A vaccine for COVID-19 is crucial for the economy. A company founded in Lansing is helping make one. 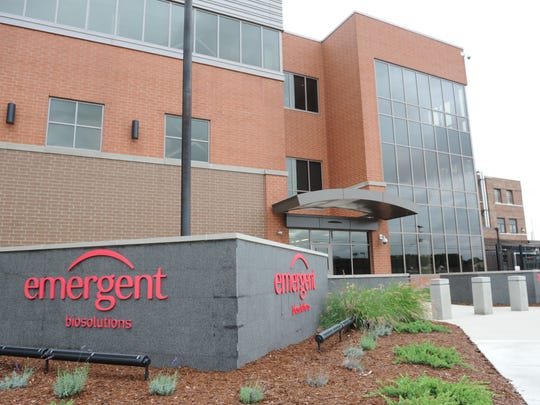 This article appeared in the Lansing State Journal. Read the full story here.

A company founded in Lansing hopes to start making hundreds of millions of doses of a COVID-19 vaccine by next year.

Emergent BioSolutions has partnered with three other companies to manufacture their vaccine candidates. The company also has joined the Warp Speed Program, a government initiative to accelerate manufacturing of potential vaccines.

Dino Muzzin, the company’s senior vice president of manufacturing operations, said that, while some vaccines can take up to a decade to develop, manufacture and license, company leaders hope to get one that can address the current pandemic out to market far faster.

“We are working at warp speed in order to commercialize this as quickly as we can,” Muzzin said.

That speed likely is crucial for a full re-opening of the economy.

Gov. Gretchen Whitmer announced Monday that all of Michigan has now moved to stage 4 of the MI Safe Start Plan.

That decision came after decreases in new cases and deaths, the implementation of widespread testing and an increase in the capacity of health systems across the state. Those same things will help push Michigan into stage 5.

But the only way to move into the final stage of “post pandemic” is to have an effective treatment or vaccine.

Emergent BioSolutions is working on both.

Emergent BioSolutions was founded in Lansing 21 years ago.

The company bought a facility and land from the Michigan Department of Public Health in 1998 and took on the name BioPort.

About seven years later, it rebranded as Emergent BioSolutions and went public.

The company started out just making the anthrax vaccine, Muzzin said, but has grown to eight manufacturing plants and two development centers along with locations in Europe.

The Lansing facility still manufactures the anthrax vaccine, he said, which is the only federally approved vaccine for the infectious disease.

Muzzin, who headed the Lansing facility before transitioning into his current role, said the facility also produces a “next-generation” anthrax vaccine.

The local facility will not be involved in manufacturing the COVID-19 vaccine, he said.

All the work on potential COVID-19 vaccines is taking place at facilities in Maryland, where the company is now headquartered.

Emergent has partnered directly with three companies to manufacturing their leading vaccine candidates: Johnson & Johnson, Novavax and Vaxart, which is working on an oral vaccine

The hope is to move one product each from Novavax and Vaxart into trials by the second half of the year, Muzzin said.

Johnson & Johnson, though, had more work done, he said, and Emergent is helping the company transfer its formula to manufacture at a larger scale with the goal of having a vaccine available commercially next year.

Companies come to Emergent at various points in the development process, Muzzin said, and the company can help partners “go all the way from molecule to market.”

That might mean early research developing a concept, he said, or working on tweaks to a product that’s already in clinical trials. It also might mean helping scale up production or simply perfecting the process.

The process itself also depends on the vaccine, Muzzin said.

Generally, though, development starts with a technology platform, figuring out a starting seed or cell line that can be infected with an agent to trigger an antigen to fight a disease. Then the process moves to quality control and clinical trials before federal approval and mass production.

“We want to inoculate people with a safe vaccine that then triggers your body to create antibodies,” Muzzin said.

The company also is working on plasma-based treatments.

Specifically, Emergent BioSolutions is working on a hyperimmune globulin – blood plasma containing high amounts of antibody. It has produced similar treatments for certain types of smallpox vaccine complications, anthrax exposure and botulism, according to a company fact sheet.

Currently, the company is working on two potential plasma-derived treatments for treating severe cases of COVID-19. One is based on human blood. The other is based on horse blood.

As the waiting game for a vaccine continues, Muzzin said it’s important for people to know the process is complicated.

That’s why it’s so important there are dozens of companies working on a vaccine, he said.

Emergent has some advantages in getting to the market faster, he said, because its partners have ingenuity and the company already has a public-private partnership with the government and expects fast-track approval for any successful candidates.

It will continue to be important for companies to continue working even after some vaccines go to market, though, he said.

“We need to have billions and billions of doses to protect the human population,” Muzzin said.