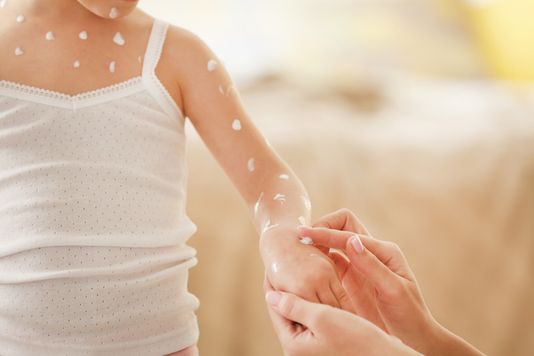 In September, Jenison’s Kids First Early Childhood Center had to exclude unvaccinated children from school for 21 days after a student was diagnosed with chicken pox.

In Michigan and across the country, cases of vaccine-preventable diseases like these have popped up in recent years. While not all the preventable diseases are life-threatening, the possibility of complications and long-term health problems makes any case a concern for healthcare professionals.

In Allegan and Ottawa County, the population tends to be well-vaccinated and many vaccine preventable diseases haven’t had a reported case in decades. However, cases of chickenpox and pertussis or whooping cough, remain concerns.

Marcia Mansaray, senior epidemiologist with the Ottawa County Department of Public Health, said the true numbers are likely higher because someone has to seek healthcare, be properly diagnosed and have a lab test for the health department to confirm a case.

“We think the trends are consistent,” Mansaray said. “People’s behavior doesn’t vary a lot from year to year. We have been working with health providers to be more vigilant in pertussis and chickenpox when they see a persistent cough or rash and encourage them to look at the vaccination record.”

In Ottawa County, those rates were higher than the state average: 3.9 percent for school-age children and 2.7 percent for daycare children. The health department is concerned that if the number of waivers continues to increase, preventable diseases can spread and create epidemics.

In Michigan, parents have the right to waive or delay their child’s vaccinations on religious, medical or philosophical reasons. Mansaray said health officials hear many different reasons when parents decide to waive or delay.

“Usually, it has to do with concern for their child,” she said. “If you’ve had a child, it changes everything about the way you think. You love them so much and don’t want anything to happen to them. When there’s a shot that they’ll cry for or you’re concerned a shot may do some harm, a parent may just want to put that off.”

Numerous studies by medical experts have shown that the chances of vaccines causing serious reaction or harm are extremely low, and there is no evidence that suggests vaccines cause autism or other cognitive disabilities. Mansaray said parents’ decisions should be respected, however, they should make a plan.

“Six months or years could go by after the waiver and you don’t think about it and then exclusion happens,” Mansaray said, referring to the cases in Jenison and West Otawa.

“So we encourage them to make a plan. What are you going to do about their education and any other services? We support your right, but have a plan, because this is happening. It could happen at some point in their school career, and how are they going to keep up? In Jenison, some of the excluded students were in the Spanish-immersion program, and it’s hard to catch up on missing that.”

Being unvaccinated doesn’t just come with the risk of academic loss. In addition to personal risk of getting the disease or infecting others who can’t get vaccinated — for age or health reasons — people who are on medicine that suppresses their immune system can also be a concern. For Ottawa and Allegan County, chickenpox and whooping cough can be more dangerous than some people think.

“Before there was a vaccine for chicken pox, it was kind of a standard practice to try to get it at a young school age,” Mansaray said. “That was a smart thing to do because younger people were less likely to have a severe infection than older people. But people do die from chickenpox or get complications that last a long time.”

She pointed to shingles, a viral rash often seen in older adults that is caused by the same virus that causes chicken pox.

“There’s also the whole issue of shingles, which can be debilitating depending on what nerve area it affects. It could affect the eyeball and cause blindness,” Mansaray said.

The good news is that while chickenpox cases remain high in the area, they are on a downward trend. Whooping cough, on the other hand, fluctuates from year to year.

One reason for fluctuating cases, Mansaray said, is because the whooping cough vaccine was changed in the 1990s from whole-cell to acellular, meaning they now use small, purified fragments of the whooping cough virus in the vaccine instead of a weakened virus.

While this new formula has been very effective at protecting babies, who are the most vulnerable to whooping cough and can die from it, the immunity doesn’t last as long. People, especially those who care for babies, need to get boosters.

“Because of that vaccine variable there, that complicates it a bit,” Mansaray said. “Our message out to healthcare providers is to look at each person’s vaccination record and run the lab test to see if they can rule out pertussis. It can spread through the community, anyone is susceptible, and getting the disease doesn’t offer lifetime protection.”

Mansaray said the health department continues to talk to schools, parents and healthcare providers to get the word out about preventing these diseases and any vaccine preventable disease. While vaccines aren’t 100 percent effective, Mansaray said most vaccines are very effective at preventing disease.

“Our stance is vaccination and handwashing are the two best tools to prevent disease that’s infectious and disease that can cause harm and death in our community,” Mansaray said. “We definitely advocate for that We don’t want a baby to die from pertussis because we didn’t act and didn’t get the message out.”