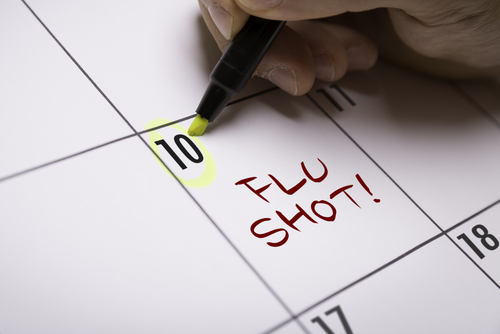 Every year as flu season emerges, so too do myths and misconceptions about the flu shot.

Some people avoid getting the vaccine because they don’t think it works well enough to be worth it. Some think they are too healthy to need it. And some worry it will make them sick, possibly remembering a time when they got the shot and fell ill soon after.

“That’s the one I always hear from the taxi driver and the person at the grocery store: ‘The flu vaccine is going to give me the flu,’ ” says Mark Thompson, an epidemiologist at the Centers for Disease Control and Prevention in Atlanta. “That is a persistent myth.”

Despite years of consistent messages from health-care providers about the dangers of the flu and the protective power (and safety) of the flu shot, many people still hold false beliefs about both. One reason is that the flu, technically called influenza, encompasses a complicated and ever-changing group of viruses, says William Schaffner, an infectious disease specialist at Vanderbilt University School of Medicine in Nashville.

Some strains cause relatively mild coldlike illnesses. Others induce worldwide pandemics. (And plenty of respiratory viruses — even bad ones and others that strike soon after people get a flu shot — aren’t influenza at all.)

Some years are less successful than others, despite constant vigilance by a worldwide surveillance network that works year-round to isolate and analyze which influenza strains are circulating. During the months after experts decide which strains to include in the annual flu shot, viruses can mutate and new strains can show up, making the vaccine less effective than originally planned.

That happened last year, when the flu shot was about 40 percent effective overall, but only 25 percent effective against H3N2, a particularly virulent strain. The result was a record-breaking number of hospitalizations and deaths among children.

Some experts worry that these effectiveness numbers cause confusion and unnecessary distrust of the vaccine. In years with a good match, people who get the flu shot are 40 to 60 percent less likely to have to go to the doctor for an influenza infection, according to the CDC. It may not sound like much if people expect the flu vaccine to rival vaccines for measles or polio.

But a vaccine that is 40 percent effective has a 40 percent chance of completely preventing infection, Schaffner says, adding up to millions of people protected from a severe illness and hundreds of thousands kept out of hospitals. And complete protection isn’t the only useful measure.

Even when people get the flu, new research shows they are better off if they got the flu shot. In one 2018 study, Thompson and colleagues analyzed data on more than 3,000 patients admitted to two hospitals in New Zealand between 2012 and 2015. Among patients with influenza, those who had been vaccinated were 59 percent less likely to be admitted to the intensive care unit. And even if they did end up in the ICU, vaccinated patients spent an average of four fewer days in the hospital.

“As you get further and further along on the continuum of severity, this study suggests that the vaccine continues to provide protection,” Thompson says. “This gives us some extra ammunition to talk about people’s worries.”

Other recent studies have shown that:

The flu vaccine appears to also protect people from long-lasting influenza complications, such as heart attacks and strokes, which become more likely during a period of inflammation that can follow an initial infection, Schaffner says. And the vaccine remains especially important for older people who are frail or on the edge of frailty. For them, the flu can be like the first domino in a series of bad health consequences.

So far, this year’s flu season is starting off slowly and looking fairly conventional, with sporadic cases and small outbreaks starting to occur around the country. The H1N1 strain is circulating, and for now, the vaccine appears to be a good match, says Gregory Poland, director of the Mayo Clinic’s Vaccine Research Group in Rochester, Minn.

But cases tend to peak in February, and there is still plenty of time for things to go haywire. That’s a lesson Poland learned in winter 2000, when he was on the committee that decided which strains to put in the vaccine. That year, the flu season started out looking tame. Then, in early November, a new variant showed up in the United States and spread rapidly, leading to a particularly bad flu season.

Hundreds of millions of new influenza mutants form every few minutes, Poland says. “People tend to think of the flu as a static virus, but it is an incestuous cesspool of viruses,” he says. “Prediction is impossible.”

Studies consistently show that the most effective motivator is an insistent recommendation from a health-care provider. But fewer than half of Americans got the flu shot last year.

To avoid the annual battle, some scientists are working on a universal vaccine that would cover all strains. Others are trying to make the flu vaccine easier to deliver with patches or other methods that don’t require needles.

For now, there are nine options, Poland says, including a version for older people, a newly re-approved nasal mist, a vaccine made in cells instead of eggs, and one that can be delivered by jet injector, a high-pressure stream of liquid. Poland recommends that people talk with their health-care providers about which is best for them.

As for the worry that the flu shot might give you the flu, Thompson offers reassurance.

“This is a vaccine made with a killed virus,” he says. “It is literally impossible for it to give you the flu.”