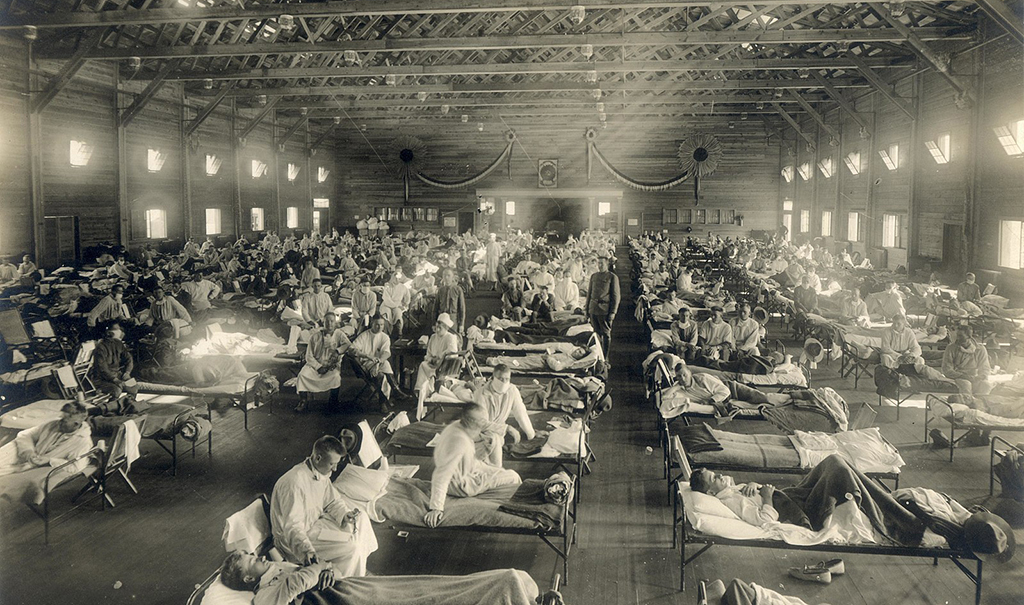 Near the end of the First World War, a deadly flu raced across the globe. The influenza pandemic became the most severe pandemic in recent history, infecting about one-third of the world’s population between 1918 and 1920 and killing between 50 and 100 million people. It was caused by an H1N1 virus that originated in birds and mutated to infect humans.

Now a century later, the world is amidst another global pandemic caused by a zoonotic disease that “jumped” from wildlife to people, a novel coronavirus known as SARS-CoV-2. While we do not want in any way to diminish the hundreds of thousands of personal tragedies caused by this virus, we see reasons to be optimistic. If managed competently, this fight may turn out differently, resulting in lower rates of infection and mortality and, possibly, fewer deaths.

We are part of a team of social scientists that span the fields of epidemiology, geography, history, urban planning and Asian studies who have studied how the influenza pandemic played out in Asia, an understudied region where the largest number of people died. There have been vast advancements in communications, science and medicine over the past 100 years, which may create a better outcome in today’s pandemic.

A hundred years of innovation in communication has dramatically changed our ability to quickly exchange vital data. Back in 1918, early phone lines were still being laid, and in many places, the telegraph was the only way to communicate. Public information came mainly from daily newspapers or was spread by word of mouth. It was difficult to share information about the new disease, its most common symptoms and the populations at greatest risk – or alert people about what was coming their way. There were no coordinated pandemic response plans in place.

By contrast, the world has been able to track this epidemic in real time, and scientists have quickly identified those most at risk of adverse outcomes: seniors and those with compromised immunity or preexisting conditions such as asthma, diabetes, lung disease or serious heart conditions. Armed with knowledge, countries that tested extensively, implemented effective contact tracing and enacted strong national lockdown and social distancing policies have “flattened the curve” of infections and deaths.

Rapid dissemination of research on this novel virus has alerted doctors to serious symptoms, including its ability to trigger blood clots and strokes as well as symptoms similar to Kawasaki Syndrome in young children – important information for assessment and treatment of patients.

One of the reasons the influenza pandemic thrived in 1918 was because of overcrowded living conditions. Though influenza viruses spread most efficiently in cool, dry environments, the 1918 flu thrived in the tropics because of dense populations. India was the hardest-hit nation: as many as 14 million people died in the British-ruled districts alone, with the death rate more than 10 times higher than in Europe. Our research shows that the most crowded areas suffered the highest losses.

With today’s response protocols in place, countries including Germany, Singapore and South Korea were able to rapidly enact measures to prevent contagion by enforcing lockdowns, shelter-in-place rules and social distancing orders. To date, these interventions have prevented or delayed about 62 million confirmed cases and averted 530 million infections across Asia, Europe and North America.

In 1918, India’s colonial administrators noted that the poor and malnourished were much more likely to succumb to flu than the more affluent. Overall, people across the world are better nourished today. While malnutrition remains a global crisis, the World Health Organization reports that daily food consumption rose by 25% between 1965 and 2015. To the extent that better nutrition strengthens the immune system, we are in a better position to fight off infection than our ancestors were in 1918.

During the 1918 pandemic, pregnant women were at particularly high risk. Statistics reported monthly from Buffalo, New York, show the extent of the tragedy. At the height of the pandemic in October 1918, premature births more than doubled, reaching 57 a month; stillbirths rose to 76, an 81% jump. In Massachusetts, the number of women who died during or right after childbirth more than tripled to 185. In a study in Maryland, half of all pregnant women who developed pneumonia died.

They were part of a particularly hard-hit demographic: this flu disproportionately affected healthy women and men in the prime of their lives, 20-40 years old. It also killed many children under five years of age.

This is not the case with COVID-19. While expectant mothers are at greater risk from infectious disease outbreaks and should take extra precautions, there is scant evidence that COVID-19 infection impacts childbirth, the growing fetus, babies or young children in the same way that the influenza pandemic did. COVID-19 is also far less deadly for young adults.

Today’s medical technologies are infinitely more advanced than they were a century ago. During the 1918 pandemic, medical researchers were debating whether the disease was viral or bacterial. Doctors didn’t yet know influenza viruses existed. Without tests or vaccines, there was limited ability to prevent or contain the spread.

There were few treatment options for those who developed pneumonia, a common complication: antibiotics were still years away, and mechanical ventilation wasn’t available.

Today’s innovations allow us to rapidly detect outbreaks, inoculate large numbers of people and better treat severely ill patients. Scientists were able to sequence the COVID-19 genome within seven weeks of the first reported hospitalized case in Wuhan, China, enabling rapid development of tests and identification of possible targets for treatments and vaccines.

While these factors give cause for optimism and it is unlikely that COVID-19 will take as many lives as the 1918 H1N1 pandemic, that event offers important cautionary lessons.

Depending on the location and timing, influenza pandemic infections came in waves, each ranging from a few weeks to a few months. The timing and duration of these spikes was influenced by transportation routes, overcrowding and social distancing measures. In some places, the pandemic dragged on for two years.

Recent data shows that globally, rates of infection are on the rise. But the fact that there is hope in the form of a possible vaccine is an indication of the vast progress humanity has made in the century since the outbreak of the influenza pandemic.