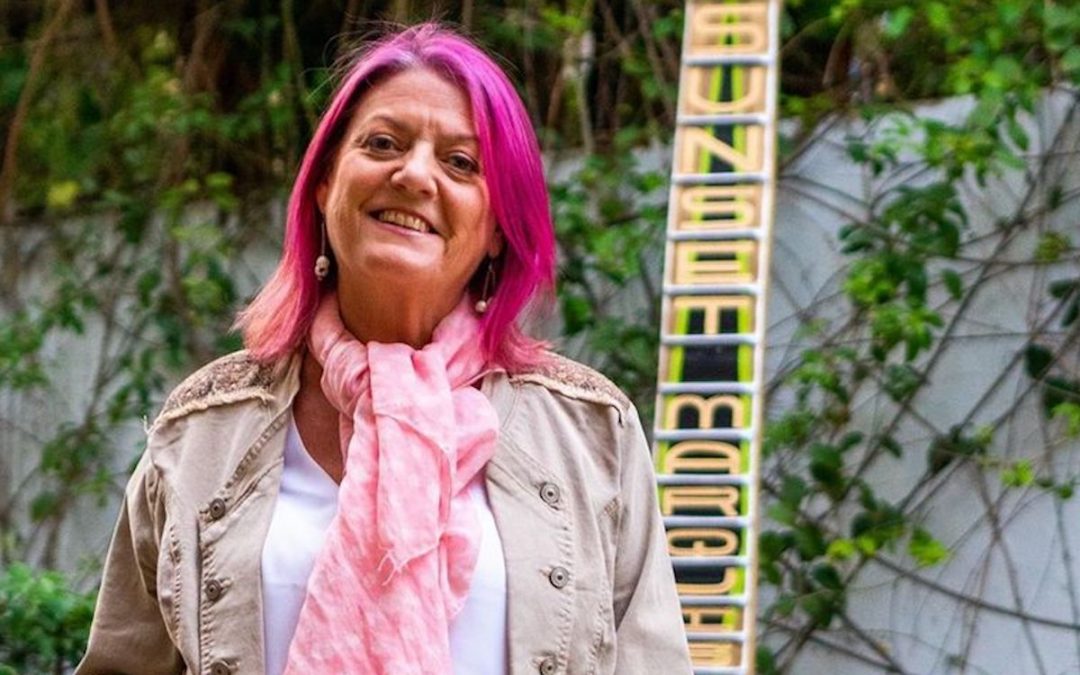 This op-ed by Rosalind Schell appeared in Prevention. Read the full story here.

Last year, just before my 52nd birthday, I got the flu and spent more than a week in a medically-induced coma. The doctors couldn’t promise my husband that I’d survive. I was so sick that I ended up staying in the hospital for 25 days.

The thing is, before this happened to me, I didn’t think the flu was a big deal. I’d never even gotten a flu shot. As an international flight attendant for almost 30 years, I’d flown all over the world and had never come down with a bad illness before. I thought I was indestructible. But I was wrong.

The flu hit me fast and hard

I woke up one morning last July with what I thought was a cold. (I live in Australia, so it was winter here.) As the day progressed, I started getting really lethargic. I was so tired that I skipped dinner with friends who were visiting from out of town, which was really unlike me. The next morning, I kept shivering. I just couldn’t get warm.

After my husband dropped our visitors off at the airport, he took me to the doctor. My fever was 40.5 degrees Celsius—that’s more than 104 degrees Fahrenheit. The doctor didn’t tell me whether I had a cold or the flu. She just told me to go home and take some Tylenol, and that I should go to the hospital if I began feeling worse.

Six hours later, I started coughing so much that I threw up. I was also struggling to breathe. I knew I needed to get to a hospital, but I was so weak I couldn’t walk to the car, so my husband called an ambulance. Even though I felt horrible, I worried that I was overreacting. I think, as women, we tend to minimize our symptoms when we’re sick. Plus, I thought there was no way I could have the flu. I thought I was stronger than that.

I couldn’t get enough oxygen

When I got to the hospital, a nurse took a swab from the inside of my nose, and 15 minutes later I was told I had the flu. They also put a big oxygen mask on my face to help me breathe.

Initial blood tests showed that my major organs were at risk of shutting down. After 90 minutes in the emergency room, they sent me to the intensive care unit (ICU). To see how bad things were, they put a central line (a type of catheter) into my groin that measured how well my lungs and heart were working. It could also give my body fluids if I needed them.

At that point, I realized this would be a long ride. I lay back thinking: I wonder if my husband knows we’re in this for a while?

I remember all the doctors and nurses were looking at the screen above my head and not at me. I could see them shaking their heads. They explained to my husband that, if my oxygen saturation didn’t get high enough, my organs could start shutting down. After one organ failed, it would create a domino effect and they would all fall. That moment felt really surreal to me, almost like it was happening to someone else.

Three days later, I was still in the ICU, struggling to breathe. The oxygen mask wasn’t working for me. Part of the problem was that it was so uncomfortable and I kept trying to pull it off. I remember the doctors and nurses saying: “Ros, stop trying to pull the mask off. If you pull it off, you’ll die.” That’s the last thing I remember before I woke up from a medically-induced coma.

I didn’t know it at the time, but I couldn’t get enough air because I had developed pneumonia in my lower right lung. By the time they induced my coma (three days after I was admitted to the hospital), it had spread to my left lung. The doctors said I was basically suffocating.

When I came out of my coma, I was in shock

My husband told me I’d been under for about 10 days. Since I hadn’t been getting enough oxygen on my own, the doctors put me in a coma so a ventilator could breathe for me. My husband had to explain the severity of the situation to me. I mean, I knew I was sick, but I didn’t know I had come that close to death.

After being in a coma for 10 days, I had lost so much of my muscle ability that I couldn’t even hold a paper cup of water. But when I did get to drink that cup of water, it was the best drink I’ve had in my entire life.

A few days after I came out of the coma, I had a grand mal seizure. The doctors weren’t sure what caused it, but said it could have been a reaction to going off some of the coma medication. Unfortunately, it happened on my birthday. Still, I’m thankful I was still in the hospital so they could treat me.

I didn’t leave the hospital for 11 more days. I finally got to head home after the pneumonia cleared and I got my lung strength back. But I still needed to use a walker with wheels—which I named Belinda—to help me get around. I wanted a strong female presence to support me while I gained strength, even if she was an inanimate object. I walked with Belinda, especially when I exercised, for a couple of months. I don’t need her assistance anymore, but she still lives in my closet. 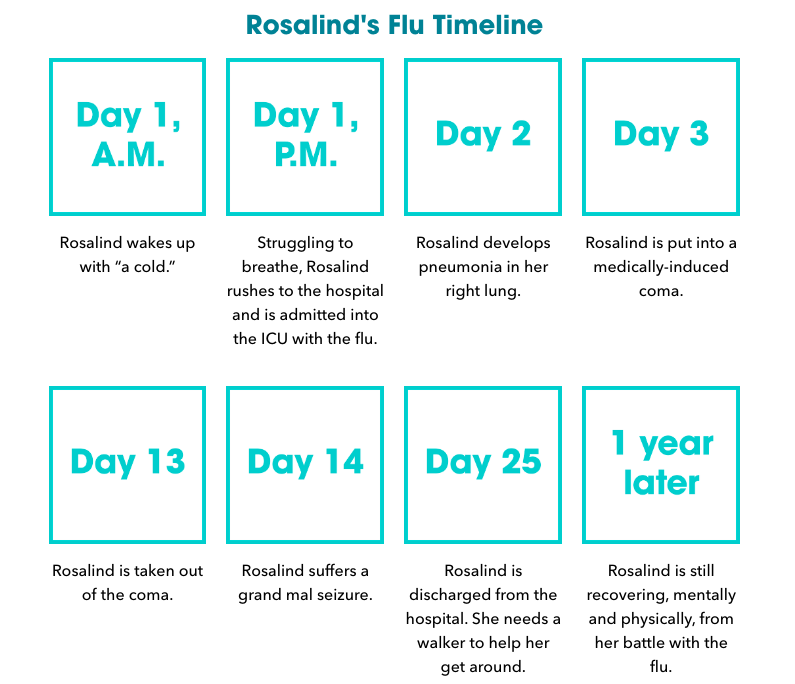 The flu is unpredictable

I kept trying to determine where I got the flu. I’d visited with a friend who’d been overseas and come back with a cold. I’d also spent time at a daycare a couple of days before I got sick. But I still can’t say: This person gave it to me.

A lot of my friends have already gotten their flu vaccines this year, but a few people I know aren’t convinced they should get one. They say what happened to me was a fluke. But the doctors said my experience, while uncommon, is a severe complication that can happen with a normal strain of the flu.

What’s scary is that it only took about 36 hours for me to go from feeling a little unwell to ending up in the hospital. Even when I got to the emergency room, I didn’t realize how sick I was.

It’s true that the really young or elderly are the most vulnerable to flu-related complications, but it can be dangerous no matter how old you are. A man in his 20s was in the hospital with the flu at the same time I was. He died. Why I lived and he didn’t, I don’t know.

The lasting effects of the flu

My brush with death hasn’t just changed my life—it’s changed the lives of the people around me. My husband and friends had to see me in the ICU when I was struggling to survive. It wasn’t easy for them to watch, but they’ve been really supportive. Emotionally, I’ve tried to maintain a positive outlook. I’ll never have a laissez-faire attitude about life again.

There have also been some lasting physical effects. I have to see a respiratory therapist to make sure I don’t have any permanent lung problems (I’m breathing fine now, but I still need to get a check-up). I also developed nerve damage in one of my legs from lying in one position for so long. It makes it harder to walk and keep my balance. The doctors said it would only take nine months to heal, but it’s been a year and I’m still struggling. I see a physiotherapist three days a week, which helps.

The doctors warned my husband that I would probably be really nervous the next time I got a cold, and they were right. Getting ill like I did can cause you to panic. I still have anxiety about getting sick, but I’ve made some positive lifestyle changes (like exercising regularly and abstaining from alcohol) that will hopefully help keep me healthy.

The flu shot eased my mind

I couldn’t wait to get my flu shot this past April. I also got the pneumonia vaccine. I’ve never been so happy to get two injections. They made me a lot more confident about my health.

Honestly, I probably wouldn’t have thought about getting vaccinated if this hadn’t happened to me. But once you’ve gone through what I did, it’s a big whack on the head. It was brutal. Now I’m a convert. I’ll be getting the flu shot forever.