In photos: Getting vaccinations to the world’s most hard to reach places 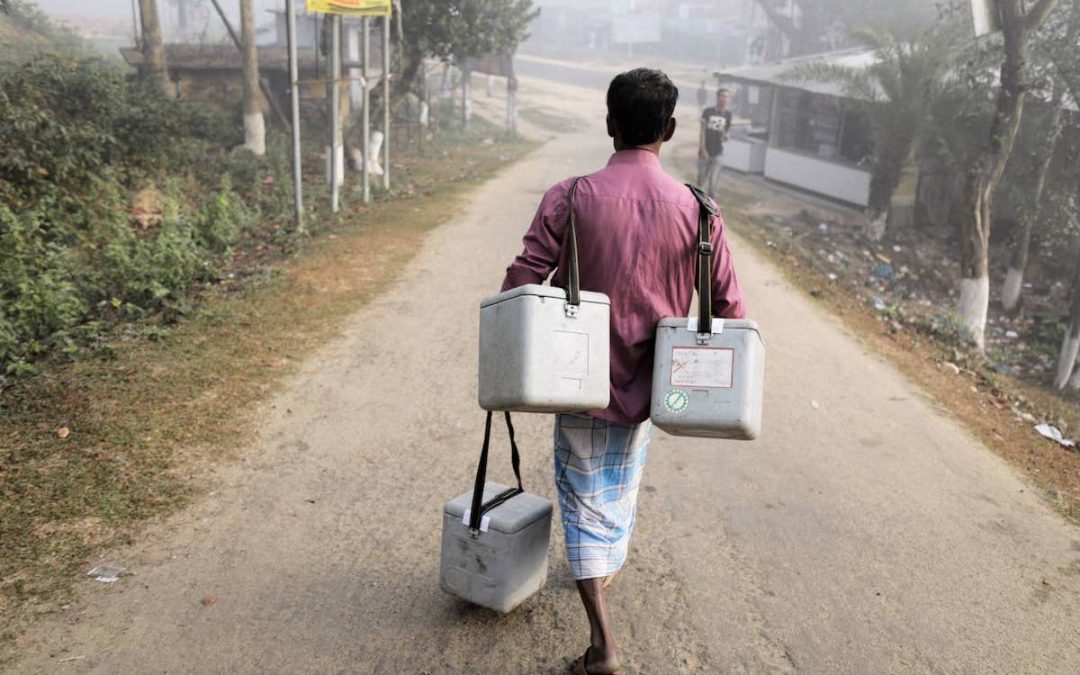 Children have the power to change the world, yet millions every year don’t reach the age of five because of preventable diseases.

Vaccines are safe, inexpensive and save more than five lives every minute. Yet 1.5 million children still die each year because they haven’t received the right vaccines.

Almost half of the world’s infants who lack vaccinations live in conflict-affected and low-income countries, which are hard to reach.

Ensuring vaccines reach every child is a massive challenge. Every vaccine must be continuously stored at the appropriate temperature from the time they are manufactured until the moment of use. This is called a cold chain.

The journey of a vaccine takes place by air, land and sea, and people around the world overcome enormous challenges to keep the precious vaccines cold and safe so they can be sent to some of the world’s hardest-to-reach places. 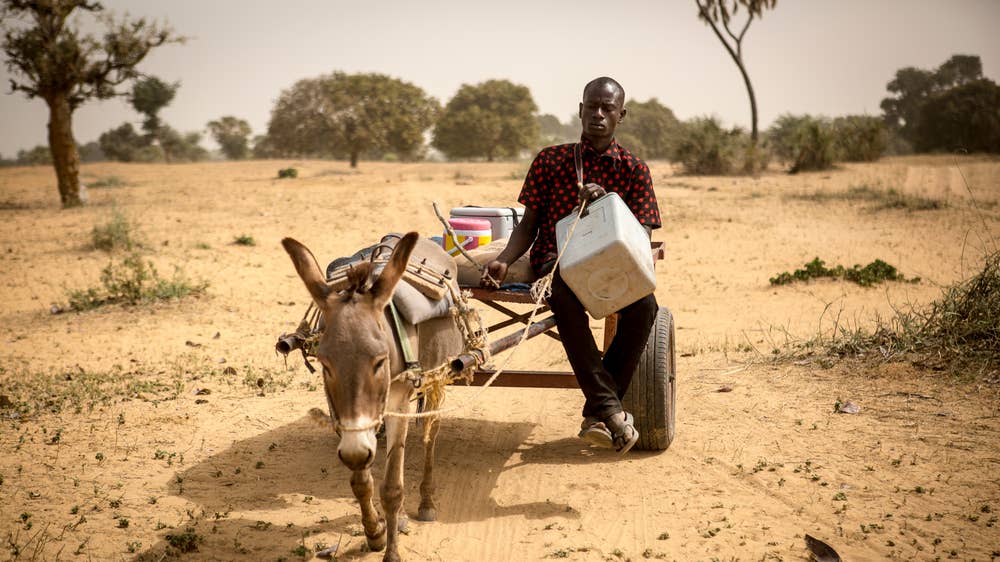 Mamadou Kassé travels by donkey cart with vaccines for miles to reach remote villages in Mali, where families are waiting with their children. Mamadou is a community health worker in Mali’s increasingly volatile central region of Mopti, where fear, insecurity and a partial ban on travelling by motorcycle between towns have all significantly limited access to lifesaving vaccinations.
Photos Unicef 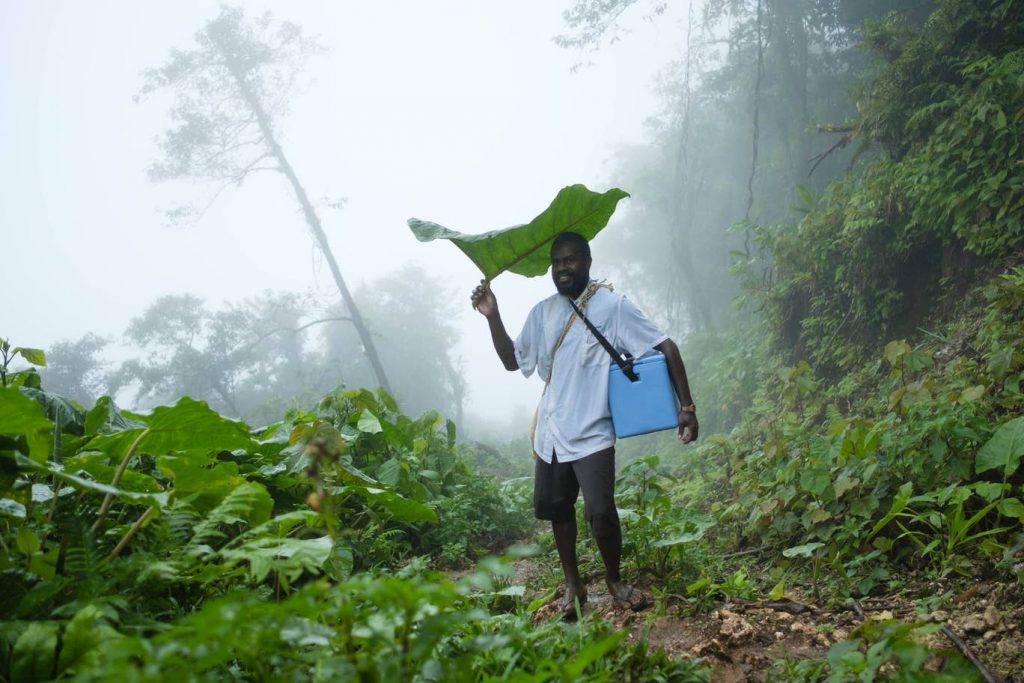 Far up a hillside on the mountainous Pentecost Island of Vanuatu, General Nurse Dominic, from Melsisi Mini Hospital, treks to deliver vaccinations to remote communities. The weather and the difficult terrain make the delivery of life-changing vaccines extremely challenging.
Unicef/Chute 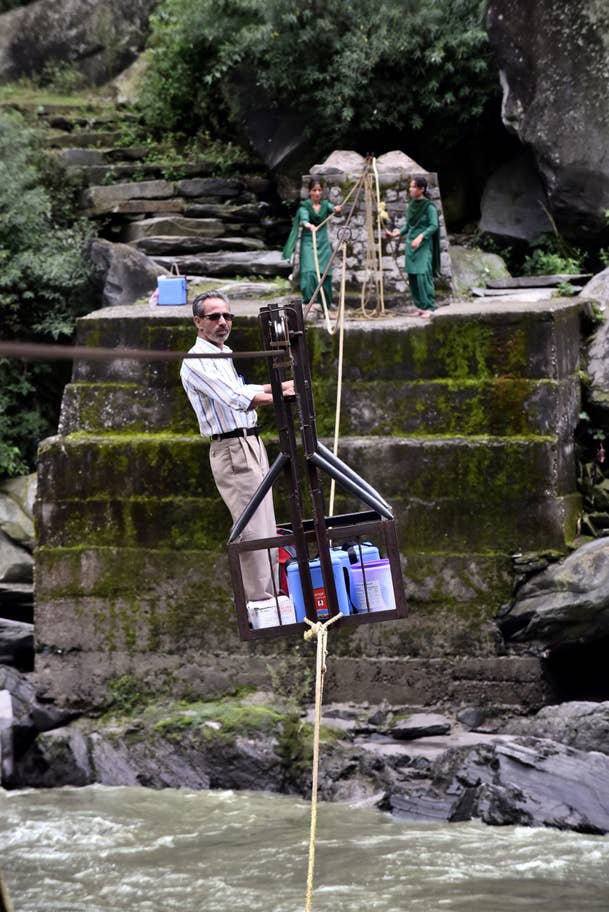 Dole Singh, who works for a primary health centre in Northern India, carries vaccines via a trolley to reach isolated communities in District Mandi. Unicef/Sharma 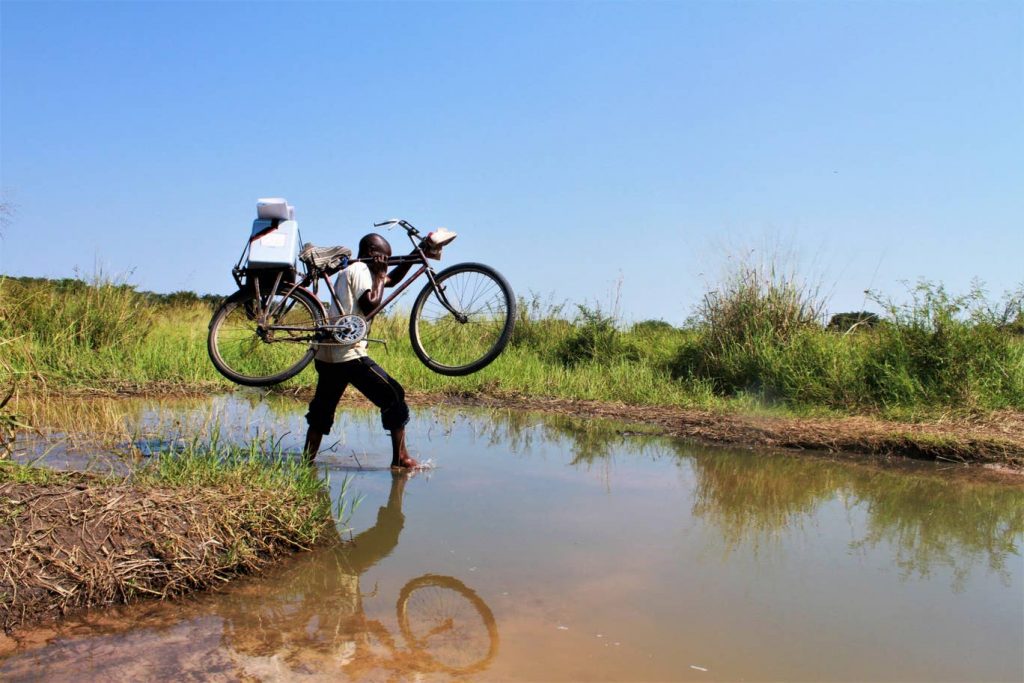 A community relay crosses a stream with his bike to vaccinate children in remote areas of the Tanganyika Province in the Democratic Republic of the Congo (DRC). Despite significant progress in recent years, many children in the DRC still die before the age of five due to preventable or treatable diseases.
Unicef/Wingi 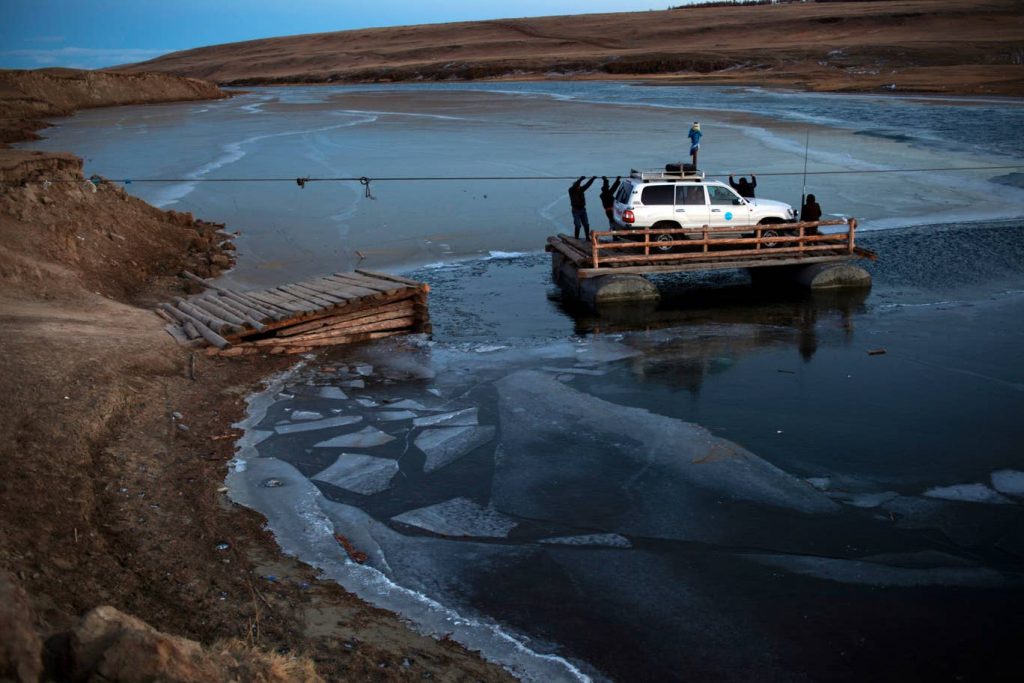 A team of measles and rubella vaccinators use a hand-drawn ferry to transport a jeep across an icy body of water in Mongolia. They have just returned from a remote area of the ‘soum’ district of Tsagaannur, in the northern Khövsgöl ‘Aimag’ province. In wintery conditions, the team travels by automobile, hand-drawn ferry, reindeer and foot in order to vaccinate children from a nomadic herder community living in the area.
Unicef 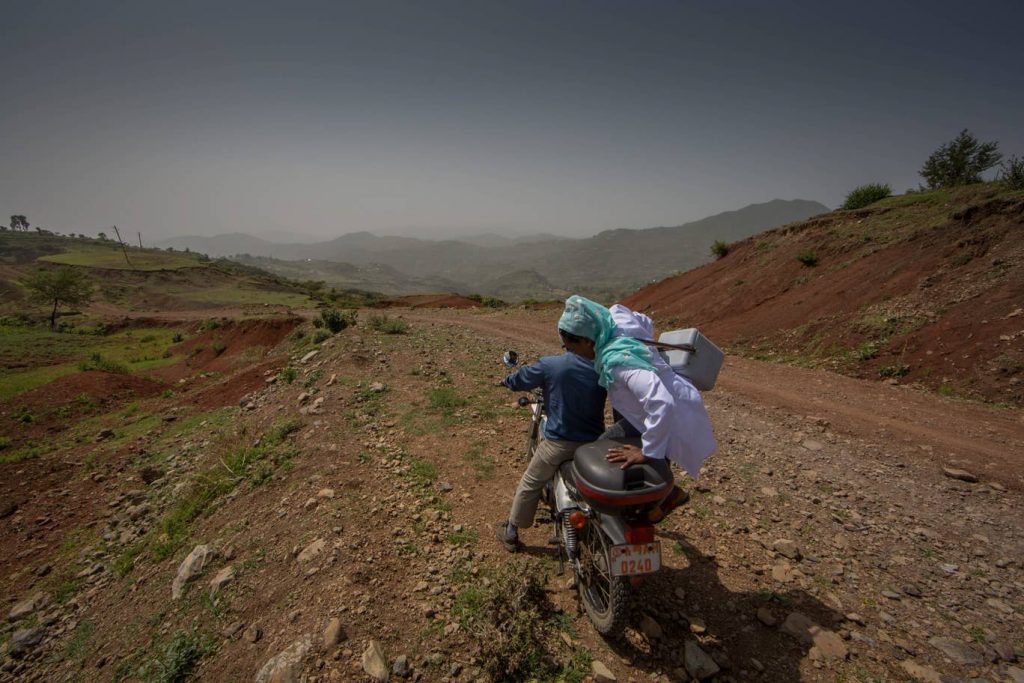 Tsehay Haile, a health extension worker in Ethiopia, transports a measles vaccine carrier box on a motorcycle from the Armenia Health post to Gashu Amba sub-village in the North Shoa zone.
Unicef/Ayene 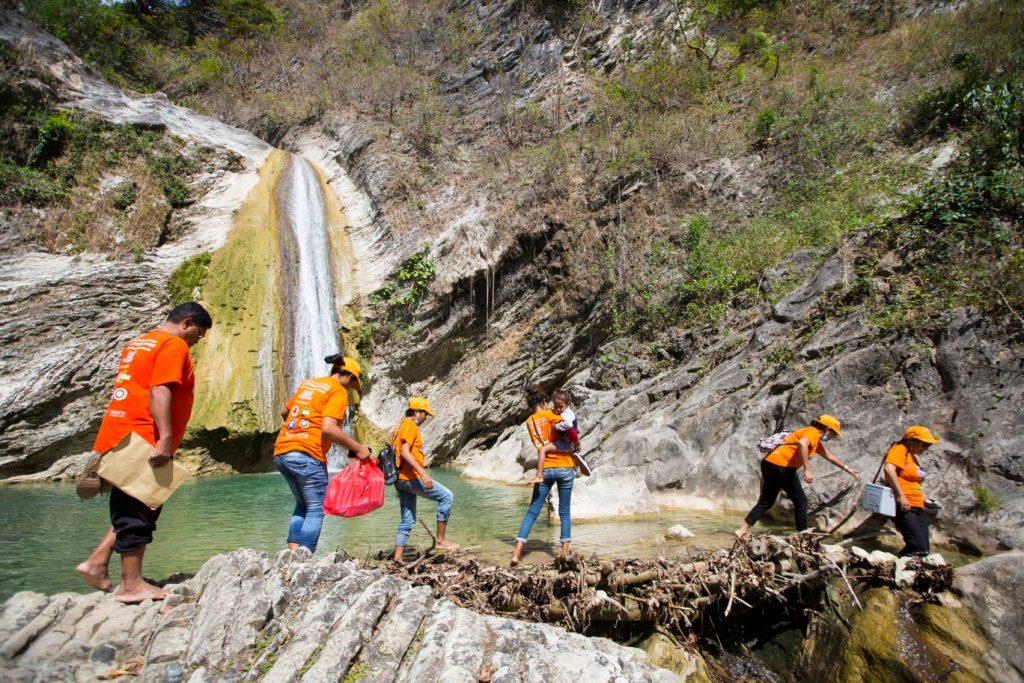 Health workers deliver vaccines as part of a national immunisation campaign against Measles, Rubella and Polio diseases. They are traveling from Baucau health centre to a village in Laga sub district, which is extremely remote and can only be accessed on foot.
Unicef/Soares 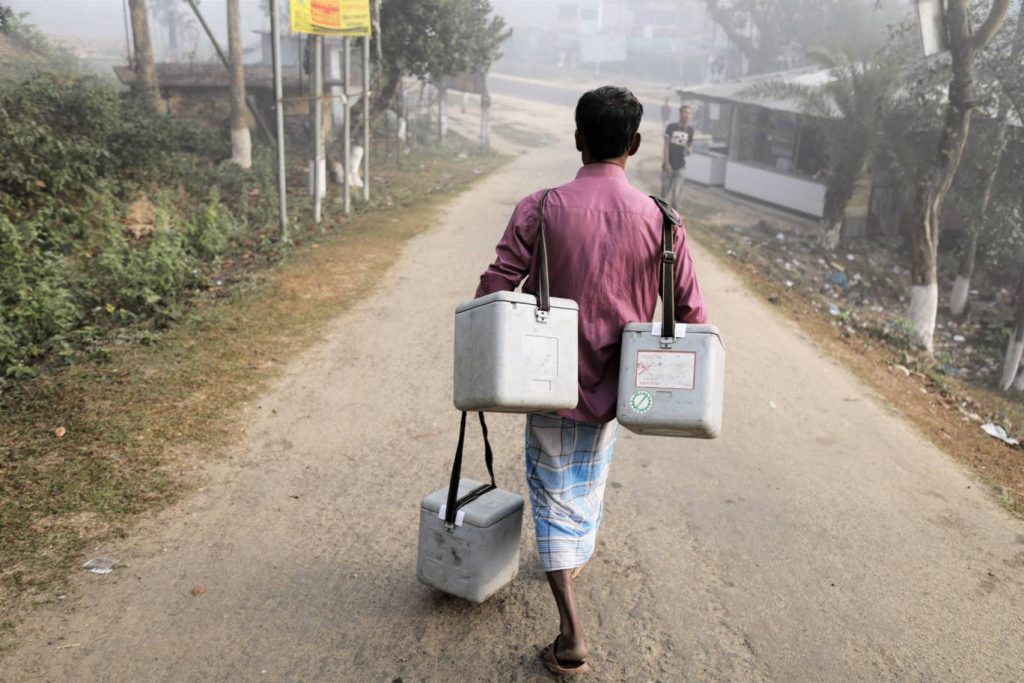 Dalal Rudro, a vaccine porter, carrying vaccines in Ramu, a sub-district of Cox’s Bazar, Bangladesh. He delivers vaccine carriers to community health workers in rural areas. They in turn raise awareness about immunisation and vaccinate children against preventable diseases.
Unicef/Krishan 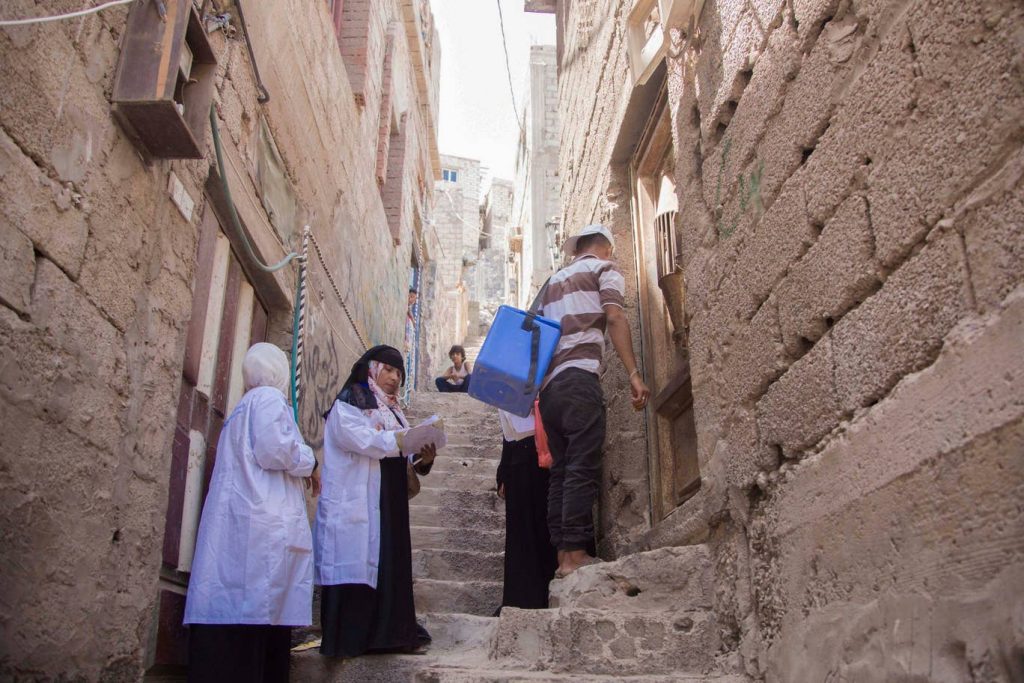 In Aden, Yemen, health workers go door-to-door to provide vaccination against cholera. The first-ever Oral Cholera Vaccination (OCV) campaign in Yemen was launched in 2018., which aims to prevent the resurgence of the world’s largest cholera outbreak. The volatile mix of conflict, a deteriorating economic situation, and little to no access to clean drinking water and sanitation have resulted in more than a million suspected cholera cases since the outbreak began in April 2017.
Unicef/Bafaqeh 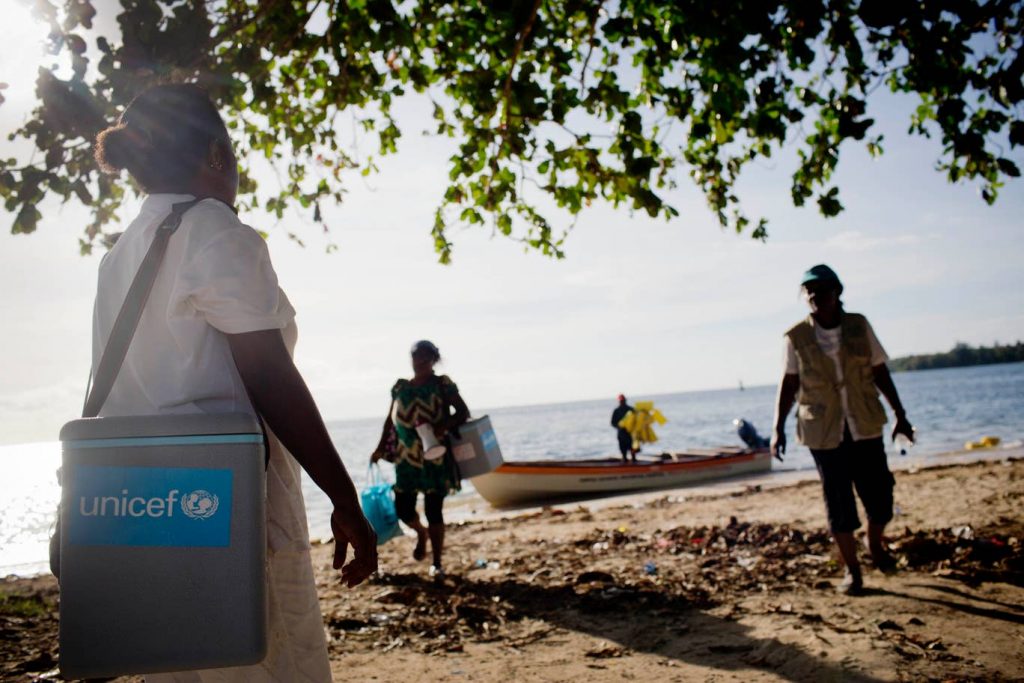 Polio vaccinators from the Papua New Guinea Department of Health arrive on a boat at Toskol island in New Ireland Province to vaccinate children against polio. In the last year twenty-six children contracted polio and there is now a country wide vaccination campaign taking place that is being supported by Unicef and partners.
Unicef/Holt