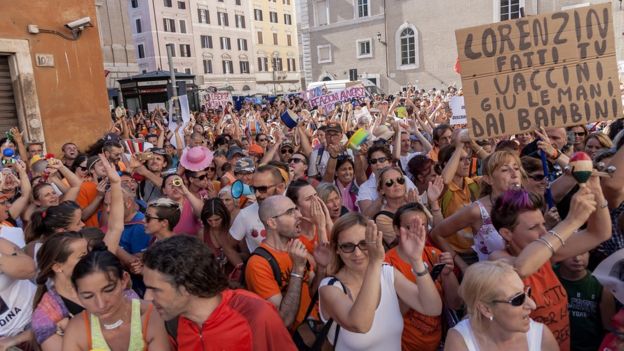 Italian children have been told not to turn up to school unless they can prove they have been properly vaccinated.

The deadline follows months of national debate over compulsory vaccination.

Parents risk being fined up to €500 (£425; $560) if they send their unvaccinated children to school. Children under six can be turned away.

The new law came amid a surge in measles cases – but Italian officials say vaccination rates have improved since it was introduced.

Under Italy’s so-called Lorenzin law – named after the former health minister who introduced it – children must receive a range of mandatory immunisations before attending school. They include vaccinations for chickenpox, polio, measles, mumps, and rubella.

Children up to the age of six years will be excluded from nursery and kindergarten without proof of vaccination under the new rules.

Those aged between six and 16 cannot be banned from attending school, but their parents face fines if they do not complete the mandatory course of immunisations.

The deadline for certification was due to be 10 March after a previous delay – but as it fell on a weekend, it was extended to Monday.

“Now everyone has had time to catch up,” Health Minister Giulia Grillo told La Repubblica newspaper.

She had reportedly resisted political pressure from deputy prime minister Matteo Salvini to extend the deadline even further.

Ms Grillo said the rules were now simple: “No vaccine, no school”.

Italian media report that regional authorities are handling the situation in a number of different ways.

In Bologna, the local authority has sent letters of suspension to the parents of some 300 children, and a total of 5,000 children do not have their vaccine documentation up to date.

In other areas there have been no reported cases, while still others have been given a grace period of a few days beyond the deadline.