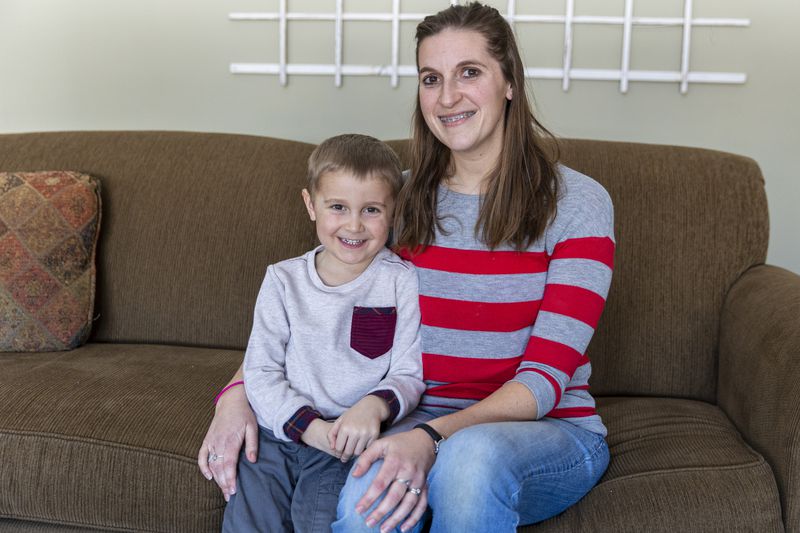 After the Denton family caught COVID-19 in early December, they all fully recovered. At least that’s what they thought.

A month later, their oldest child, 5-year-old Harvey, came home from school with a fever that only continued to worsen.

“It was the most terrifying thing I’ve ever been through, for sure,” his mother Abbey Denton said.

Over the course of the next week, Harvey had high fevers reaching 104.7 degrees. After two visits to the Sturgis Hospital emergency room and a follow-up to the family’s pediatric doctor didn’t result in any answers, Denton took her son to Bronson Children’s Hospital in Kalamazoo.

The day Harvey headed to Bronson, he began to develop a rash that spread quickly over all his body, his mother said.

There, in mid-January, he was diagnosed with Multisystem Inflammatory Syndrome, commonly referred to as MIS-C, with the C standing for children. The disease, which doctors are still learning about, has been turning up more and more in young children, weeks after they contract COVID-19.

Signs typically include a rash that may look like red spots, blotches or bumps, abdominal pain, acting unusually sleepy or confused and a high fever that will persist for days on end.

At Bronson, Harvey was given a 12-hour immunoglobulin treatment. The rash began to fade and his fever broke. But, within a matter of hours, his condition began to worsen again.

“At one point, I thought I was watching my son die,” Abbey Denton said of watching Harvey’s condition worsen.

Doctors ran more tests and soon found fluid that had built up around Harvey’s heart and in his lungs. They then discovered Harvey had inflamed arteries and was developing blood clots.

It would take a second 12-hour treatment of immunoglobulin. Once that second treatment was complete, Harvey was showing signs of improvement. After another four days at the hospital, Harvey’s parents were able to take him home.

“The other really scary part was that everyone who came in to talk to me said, ‘This is new, we don’t know that much about it,’” Denton said. “At Bronson, they told us, they had not lost any children to MIS-C. They said they had some bad cases worse than my son’s, but those kids made full recoveries, so that was helpful.”

Over a month after the diagnosis of MIS-C, Harvey is doing much better.

“He got back from the hospital, he was weak, he was slow, he was very tired,” his mother said, as Harvey played with blocks in her living room. “And since then, he’s only increased in his energy and his appetite and everything and he’s great. I would say he is back to normal.”

Harvey will go back in for checkups over the course of the next year.

While Bronson did not see its first case of MIS-C until January 2021, the first cases in Michigan were reported in April 2020. As of Feb. 17, there had been 263 confirmed cases of MIS-C in children in Michigan, according to data provided by the Michigan Department of Health and Human Services.

And while most of the COVID cases for children have not resulted in hospitalizations, the uptick in cases has had a direct correlation to the increase in MIS-C cases, Tiongson said. Tiongson said he is yet to see an MIS-C case in a child who did not have COVID weeks earlier.

PreviousCDC: 61% of babies not hospitalized due to Covid-19 if mother was vaccinated
NextBenzie Leelanau District Health Department: Being fully vaccinated means leads to fewer hospitalizations, deaths