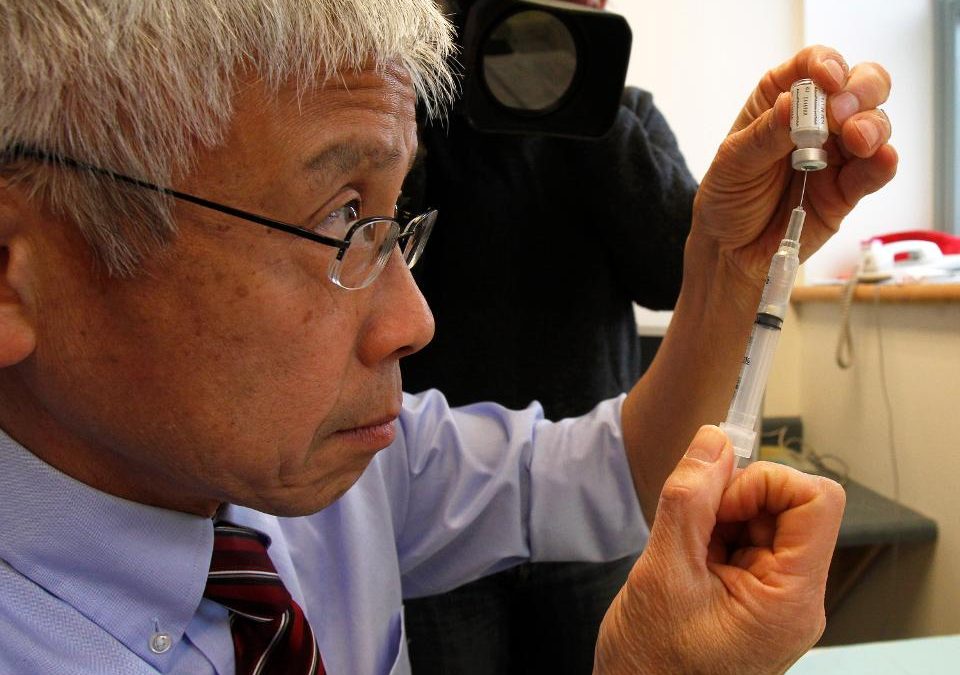 Cases of pertussis, also called whooping cough, have been climbing over the past decade and a half. The disease, which causes severe coughing for months at a time and can cause death in infants, steadily declined over several decades after a vaccine became widely used in the 1940s. Cases reached their lowest rates in the 1970s and early 1980s, with just 1,000-3,000 cases a year.

So what’s been going on? If we’ve had a vaccine since the 40s, why have whooping cough cases increased so much, especially when nearly all other vaccine-preventable diseases have almost disappeared? (The flu is always an exception.) A new study in Science Translational Medicine highlights three contributions to the increase, but even this new study falls short in discussing all the factors causing increased pertussis cases.

First, it wasn’t the “anti-vaxxers.” Anti-vaccine advocates such as Jenny McCarthy have been inappropriately and inaccurately blamed for the return of pertussis. While pockets of low pertussis vaccination rates in communities can exacerbate outbreaks, those pockets don’t explain how cases have climbed so much since the 50s. (And no, it wasn’t “illegal immigrants” either.)

According to Matthieu Domenech de Cellès, of the University of Michigan in Ann Arbor and the Institut Pasteur at the University of Versailles St-Quentin-en-Yvelines in France, and his colleagues, three main forces are responsible: failure of the vaccine’s protection to last long enough, incomplete vaccine coverage (especially among adults) and normal population turnover.

Not New Conclusions — But a New Method

In a press release, coauthor Aaron King, an infectious disease ecologist and applied mathematician at the University of Michigan, said, “Conventional wisdom is that the current vaccine is the problem, but that’s not consistent with what we see.”

But that’s not what conventional wisdom has held. Rather, the high effectiveness of the pertussis vaccine has been widely accepted and supported by the evidence, but multiple studies have shown how its protection wears off over time. In fact, researchers have known for at least 6 years that the vaccine’s waning immunity—not a shoddy vaccine to start with—has contributed to rising cases, especially among adolescents.

The combo of that waning with poor adult coverage is also well established, one reason for the recommendation that pregnant women get a Tdap booster in each pregnancy. (Tdap is the pertussis vaccine for adults, not a bad idea for dad either.) And researchers also know that elementary age children and teenagers are major sources of transmission.

But while this study’s findings aren’t new, they are valuable because they support the previous epidemiological evidence — the observational studies on how the disease spreads — on waning with an entirely different method, mathematical models. This study relies on complex transmission models and found support for past findings, an important part of the scientific process.

What This Study Did Differently

Past studies compared groups of people who did and did not get whooping cough and/or measured their levels of antibodies in the years after vaccination. In this study, the researchers used their disease transmission models to analyze pertussis rates in Massachusetts over the 16-year period from 1990-2005. They wanted to determine if the pattern of cases fit better with the possibility of the vaccine failing to invoke immunity in large numbers of people, waning over time or only offering partial protection initially.

The verdict: waning immunity is the culprit, along with normal population growth and not having enough people immunized at the start. As adults who had immunity from childhood infections grew older, more of the population increasingly had been immunized with vaccines whose effectiveness waned over time.

It was inevitable, then, that cases would start climbing as the immunity among ever larger proportions of the population wore off. Interestingly, their work found it’s not just the fault of the newer vaccine either: “Our results suggest that the train of events leading to the resurgence of pertussis was set in motion well before the shift to the DTaP vaccine.” (An older vaccine containing the entire pertussis bacterium was replaced in the 1990s with one containing only a few proteins of the bacteria because the older vaccine caused more febrile seizures—scary but without long-term effects.)

Other Factors Contribute to Increasing Cases

But other factors besides waning and inadequate coverage play a role too, some mentioned in the paper but not highlighted. First, physicians are looking for pertussis more often than they did in the decades after the vaccine had reduced the disease so much. Increased surveillance means increased identification: if you’re looking harder for it, you’ll find more of it.

Further, as the authors do note in their paper, a better method of diagnosing pertussis, called serological testing, became available in 1987, causing an immediate bump in cases as more were identified. They did not see a similar increase in 2005 when doctors began using another highly accurate testing method, polymerase chain reaction (PCR). (Pertussis cases were roughly similar — around 25,000 — in both 2004 and 2005.) But it’s still possible that the combination of PCR testing and higher surveillance together helped identify more cases over the next decade.

Finally, it’s still possible that the vaccine protects the person who receives it while not necessarily preventing them from passing along an infection to others. This is called asymptomatic coverage: you don’t show symptoms of the disease, but you can still catch and carry the bacteria in your throat and potentially transmit it others. An interesting study on baboons in 2014 showed how this can happen particularly with the current vaccine. (It’s in baboons, so there’s no guarantee it’s happening in humans, but the evidence on transmission suggests it could be.)

What’s It All Mean?

Given how highly contagious pertussis is — one infected person can infect up to 6 unimmunized people — the combination of a waning vaccine, too little overall coverage throughout the entire population (including older adults), increased surveillance, better testing methods for diagnosis and the possibility of asymptomatic transmission help the increasing numbers make more sense.

Several solutions might help reduce cases: more widespread vaccination among adults, adding vaccine boosters for teens and/or adults, a new vaccine with immunity that doesn’t wane over time or increased efforts at ensuring all children are up to date with pertussis vaccinations before heading to school. The CDC has already made recommendations to protect the most vulnerable people, young babies, with the recommendation for mothers to get a booster in pregnancy. Until public health officials decide the best way to confront the rising rates, the most effective way to reduce risk of infection is staying up to date on the vaccine.