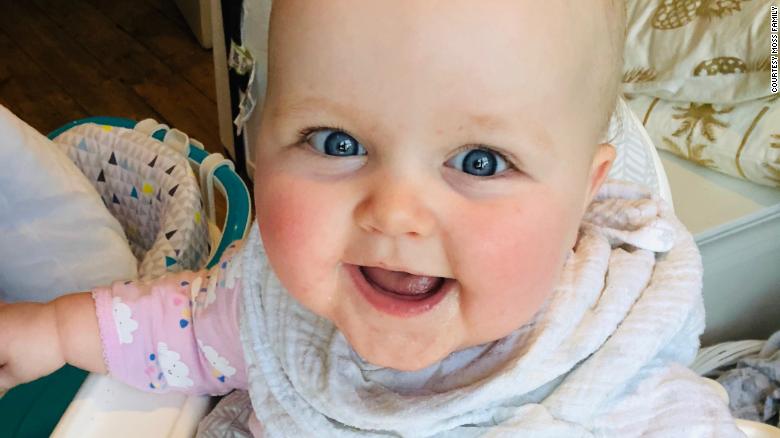 (CNN) Like all people who believe in facts and science, Jilly Moss is incredulous when she hears anti-vaxers say that measles is no big deal.

Moss has a particularly personal perspective: Her baby ended up in the hospital last month because of the virus.
Alba, who was 11 months old at the time, had a fever that soared over 107 degrees Fahrenheit. Her eyes were swollen shut for days, and doctors had to give her medicine to prevent her from going blind. She couldn’t eat or drink and had so much trouble breathing, doctors had to put her on oxygen.
And the doctors, since they’d never seen measles before, misdiagnosed her repeatedly, sending her home, where she became sicker and sicker.
At one point, she became totally unresponsive. Her parents thought they might lose her.
“She suffered so much and was so brave,” Moss said.
Like all babies under age 1, Alba was too young to get her first measles vaccine. Now, her mother wants the world to know what measles can do to a healthy infant.
“I think it’s important that you know I’m not one of these people who are crazy pro-vaccine and is saying ‘you must do this’ and is throwing it down people’s throats,” Moss said. “All I want to do is educate people because we as parents did not understand how sick measles could make our baby.”
Moss, who stays at home with Alba, and her husband, Richard, a global brand manager for a software company, live in London. They’ll never know how their daughter contracted measles.
There have been hundreds of measles cases in London since October, mostly in the northeast part of the city, according to Dr. Anita Bell, health protection consultant for Public Health England.

The Mosses live in southwest London, far from that outbreak, but measles is one of the most contagious diseases.