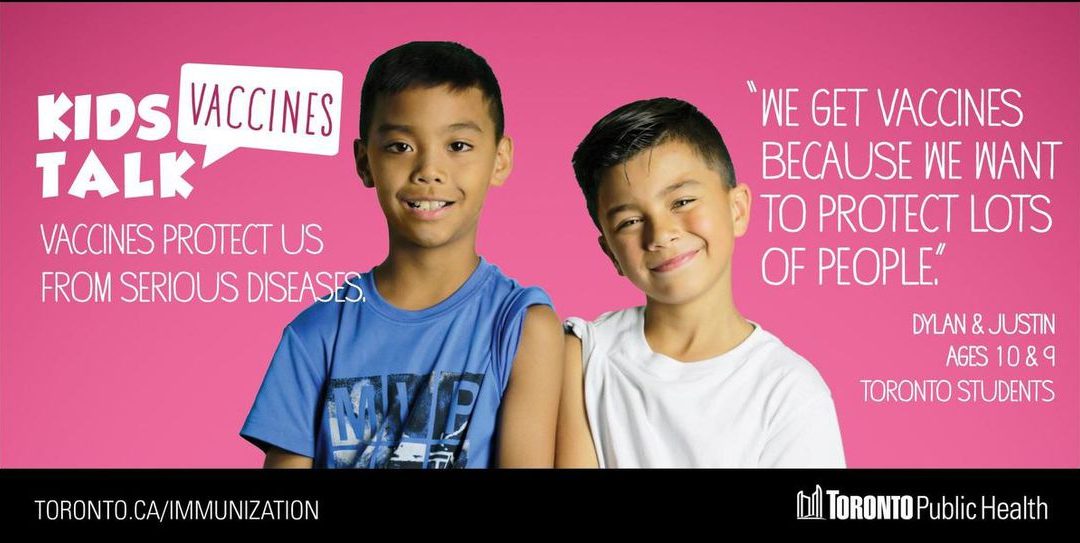 This article appeared in The Star. Read the full story here.

Toronto Public Health announced Monday it is launching an awareness campaign encouraging families to get their children immunized.

The campaign, which will include ads in bus shelters, in Yonge-Dundas Square and on social media, focuses on what children have to say about vaccinations.

“Vaccine are like a shield that keeps us healthy and strong,” reads one, featuring a young boy with his sleeve rolled up.

The campaign is being launched as part of Toronto Public Health’s effort to combat so-called vaccine hesitancy — the growing number of people who are reluctant or who refuse to allow their children to be vaccinated, which Toronto’s medical officer of health, Eileen de Villa, says is on the rise.

In Canada, an estimated 20 percent of parents are vaccine-hesitant, according to research.

De Villa said that Toronto has seen the number of vaccine exemptions — granted for philosophical and religious reasons — rise from 0.8 percent in 2016 to 1.7 percent currently.

Both de Villa, and Councillor Joe Cressy (Ward 10 Spadina—Fort York) said that although it features children, the campaign is about more than getting children to ask their parents — perhaps parents who may not support vaccines — to talk about the issue.

“We want everybody talking to everybody,” said Cressy.