#WhyIVaccinate Is Trending, Here Are The Reasons 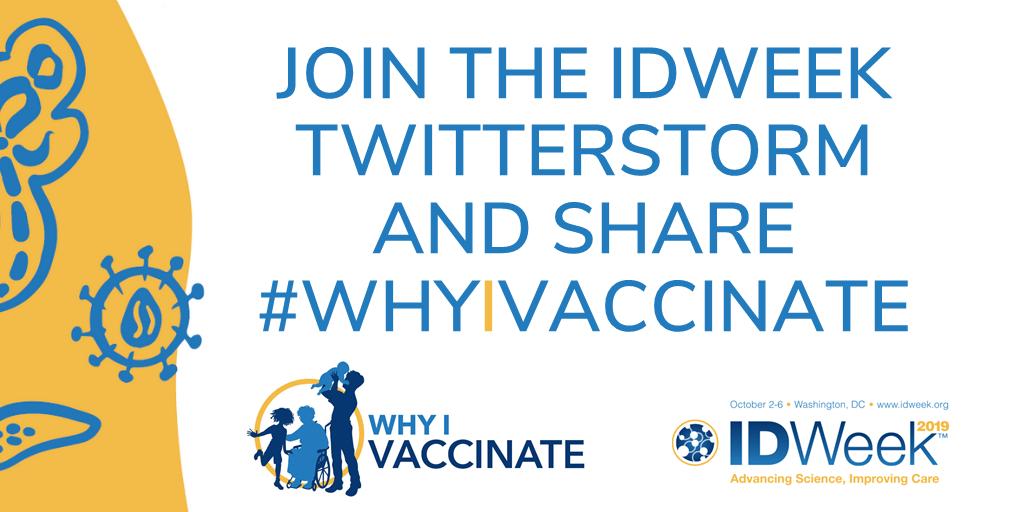 This article appeared in Forbes. Read the full story here.

Here is a Twitter hashtag that was launched for the public good. No, it’s not #SignsYoureNotVeryPopular. It’s #WhyIVaccinate and it’s gone on to trend on Twitter since the following tweet: 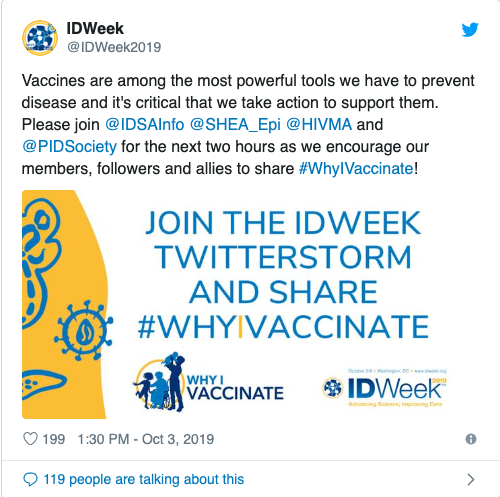 If you’re wondering what drivers’ licenses and passports have to do with vaccines, ID Week is not for that type of ID. ID is short for infectious diseases. ID Week is the combined annual meeting for the Infectious Diseases Society of America (IDSA), the Society for Healthcare Epidemiology of America (SHEA), the HIV Medicine Association (HIVMA), and the Pediatric Infectious Diseases Society (PIDS). As far as scientific meetings go, it’s humongous and the place to discuss fungus as well as bacteria, viruses, and other microbes.

Watch as the years progress in the graphic and see how the number of measles, tyhoid, polio, and diptheria cases dipped substantially after vaccines against those diseases were introduced. Those big drops weren’t due to supplements, herbs, spices, eggs in various orifices, or chiropractic manipulations.

Yes, protect you against diseases vaccines do, in Yoda-speak. On the list of things to get, vaccine-preventable diseases rank well below brick-to-the-head and used-toilet-water-in-the-mouth. Getting them can be miserable or even worse as @DrJamieFriedman tweeted:

Even if you survive such diseases, they could end up costing you an arm and a leg or some fingers and toes:

But it’s not just all about you, no matter how narcissistic you may be as @mirandastaab reminds us:

By preventing the spread of infectious diseases, getting vaccinated helps those who may not have the fortune of having strong immune systems:

There are plenty of direct and indirect benefits, including those that may not be obvious:

When people get vaccine-preventable diseases like the flu, they may get unnecessary antibiotics:

More bacteria that are antibiotic-resistant could eventually give you an infection that’s hard-to-treat or even impossible to treat. And that’s no treat.

These all seem to be obvious reasons to get vaccinated. After all there are currently no other alternatives that are backed by science. Denying science can be like denying reality:

So why then have vaccination rates been dropping since 2000? Why has this happened:

And why has the World Health Organization (WHO) had to say this about “vaccine hesitancy,” as I wrote before for Forbes:

One problem is that vaccines have been victims of their own success. Most people don’t see how bad diseases like measles and polio can be. These days most people don’t witness what @SaadOmer3 has witnessed:

Or what @thepoliticalcat has experienced and seen:

That’s because vaccines have been so good at preventing these diseases. People have started to take vaccines for granted like running water, toilet paper, and poke bowls, not necessarily in that order. Speaking of water:

No, many people have forgotten or never learned the important roles that vaccination have played in world history, such as helping win wars:

Instead, there are plenty of misconceptions floating around like viruses such as the flu vaccine causing the flu:

There are claims that vaccines are some kind of government, pharmaceutical company, or health care system scam or conspiracy. If this were the case, then why would ID docs, who could make more money off of treating more patients with infectious diseases, instead say something like this:

Selling medications, therapies, and procedures can be a lot more profitable than selling vaccines. So the motivation of efforts to encourage vaccination such as the IDWeek #WhyIVaccinate is not to earn money. It is for the public good and wanting people to become adults, in more ways than one:

Plus, you could be a lot more popular if you don’t spread infectious diseases #SignsYoureNotVeryPopular.